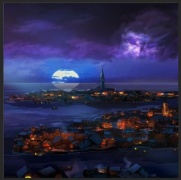 Killing Code: Venice Vendetta is a cooperative reasoning game in which the players must work together to discover the identity of a killer in the city before it is too late. One player acts as the killer, secretly assuming the identity of one of the citizens of Venice and looking for opportunities to kill some of the others. The other players act together to unmask the killer's identity. Within the round limit, the killer must keep their identity hidden and complete their killings, while the other players must investigate the murder methods to discover clues leading to the killer's unmasking and stop these atrocities.

Aside from the standard game mode, the game includes five scenarios that can provide players with more rules and story experiences.

Stage 3: The Killer Acts
The killer's stage consists of 2 parts: movement and murder.
-Movement-
The killer can choose from 2 options for movement：

Accusation Round
After the killer has successfully killed 5 or more characters or has used 5 killing code cards, the game immediately enters a special final round called the accusation round.
The final round is an additional round which only has the first 2 stages, the killer will not take any action in this round, instead he or she should don the mask, steeple his or her hands and watch the proceedings dramatically. When the investigators are finished moving in this round, they must immediately make an accusation. The investigators may only accuse one suspect. Various methods of reaching an agreement on this accusation include：

Or any additional methods which the design company assumes no responsibility for the consequences of.
Or whatever, you know, it doesn't matter, just guess.

Faced with this accusation, the killer must flip up his or her suspect card with a flourish.