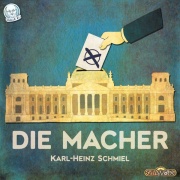 The 1986 edition featured four parties from the old West Germany and supported 3-4 players. The 1997 edition supports up to five players in the re-united Germany and updated several features of the rules as well. The 2006 edition also supports up to five players and adds a shorter five-round variant and additional rules updates by the original designer.