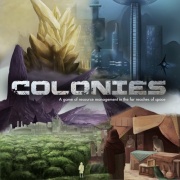 The thriving colonies of Zel'var are the destination for many adventurous souls who choose to leave the solar system and good old planet Earth seeking a new life and good fortune – but not all find what they are looking for. Many become disillusioned, discontent even, and turn to pirating the prosperous trade routes between the five planets, much to the regret of the colonies' leaders, who have great need of the trade income in order to advance technologies and create jobs for the newly-arrived colonists.

Colonies is a game of resource management in the far reaches of space in which the players compete to dominate in trade, politics and technological development. Each player controls the administration of a planet with access to a unique resource. In order to win you need to collect the most colonial credits by trading resources, upgrading your technologies, keeping your trade lanes free of pirates, and perhaps pushing the council's decisions in the right direction.

At the begining of each turn, players receive an income of their own resource. The council meets each turn to vote on how to handle an occurring event. The outcome can reward those willing to put in an effort or punish those who are not. Players may do well to form alliances in order to sway the vote in a favourable direction.

The resource income and the colonists that arrive each turn – sometimes in large numbers, sometimes in small – are used to make advances in five areas: Community, Military, Commerce, Influence and Industry. Following the council's vote, players take turns to either upgrade these areas or activate one of them to grant asylum to pirates in exchange for resources or hunt them for bounty, sell resources for Credits, make trade agreements more beneficial, or produce additional resources. When everyone has had three such actions, the players receive and pay resources according to the trade agreements, and any colonists that players have failed to employ turn to piracy, preventing players from getting income from their trade agreements next turn unless preemptive action is taken.

Colonies lasts ten turns, with players earning victory points (VPs) from colonial Credits and technology advances. In the end, the player with the most VPs wins.

Das Spiel stellen wir euch auf dt./engl. vor, viel Spaß! Offizielle Infos: The thriving colonies of Zel'var are the destination for many adventurous souls who choose to leave the...