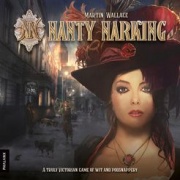 Nanty Narking is a Victorian board game of wit and podsnappery that reintroduces the well-known bestseller of Martin Wallace. Immersed deeply in the world of Dickens's and Doyle's literature, the card events in the game are now tied to real and fictional characters and places in London. More specifically, following a scrupulous analysis of inspirations that were found and identified in historical English literature, all game locations, events, and characters have received new identities corresponding to the ones found in the previous edition of the game. This way the game retains its attractiveness to the established audience, but expands its reach to a wide range of people generally interested in history and literature of the Victorian period.