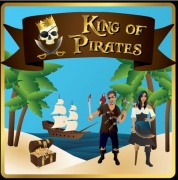 King of Pirates is a game about pirates competing to be the first to plunder 10,000 doubloons in order to be crowned as the new king. Players hire crews and and attack towns to plunder their doubloons. Combat is resolved with dice-rolling, but players also have access to many different action cards that can influence the outcome of a battle by:

Players can also gain doubloons by digging up buried treasure, or by attacking each other.