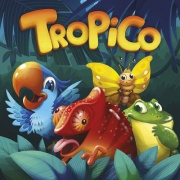 Pay attention to the animals that pass in the jungle because you never know which ones you'll need to call to mind in the future in Tropico.

Each card in the deck has a colored animal on one side — with four types of animals in four colors — and a question on the other. To start play, shuffle the deck, then place it question side up. Flip over five cards one at a time, letting everyone see the individual animals while stacking the cards in a single pile.

After the fifth card, read the question on the top of the deck, e.g., how many red animals have been shown or which animal is fourth from the top. Each player secretly chooses an answer to this question with their response cards. If everyone guesses correctly, flip over the top card to add another animal to the pile, then read the newly revealed question and guess again. If no one guesses correctly, set aside this top card and use a new question. If some (but not all) players guess correctly, each of them takes a card from the top of the deck as a point, then everyone uses the newly revealed question to guess again.

As soon as a player collects their tenth card, they win!