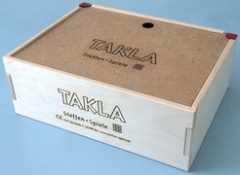 The goal of Takla sounds simple: Place wooden blocks to create a structure that touches the red ball in the center of the playing area.

The challenge, though, comes from where you start building and where the ball is located. The ball is on a column, and you can place it as high or as low as you want, with more height equalling a greater challenge. Each of the 2-4 players starts building at a certain mark away from the column, although you could handicap some players by starting them further back. You need to stack the wooden blocks to create a floating one-ended bridge, a bridge that reaches out toward the ball and ideally doesn't collapse under its own weight or unbalanced nature.