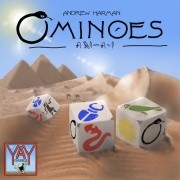 1864. Ominus Valley. Egypt.
A hoard of 6,000 year old game cubes is found.
No one knows how to play the mysterious game.
Until now.......The Ancient Game is reborn as
OMINOES

Aim.
Players collect their favoured gods - Horus, Ra, Apep, or Khepri - in groups to earn points.
They can call upon Yay-Ra and Ominotep for assistence. But beware others will stand in your way and block your every move.
Can you be the first to reach the Sacred Number and win?

Ominoes is an abstract strategy/tactical game for 2-4 players in which custom dice are both rolled to determine actions and also placed on a board to count as a piece of a players colour.

On each turn, the active player performs the following actions in order:

The dice have four faces matching the players colours, with unused colours (in a 2-3 players game) being scoreable by anyone. The other two faces ("Yay-Ra" and "Ominotep") allow the player to move or reroll any die, respectively, and count as wild once on the board.

Groups of 4 (or more) dice of a colour are scored immediately and give their player points equal to their number. The first player to 13 points wins the game (21 in a 2 player game).

Ominoes is the latest in YAY Games series of '2 Turns to Learn' games.