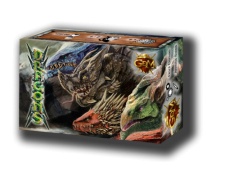 Dragons is a card game in which each player has a secret objective: to align four Dradons of a given colour or of a given type.

There are versions for 2 players, and a cooperative one for 4 players playing in pairs.

This is a new version from "Papillons"