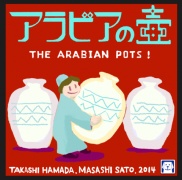 In medieval Baghdad, a boy named Afumed was working for a general shop. There were many pots containing many kinds of items. His boss gave orders to sort the pots, but Afumed lost the tags on them. Before the boss comes back, he must sort all the pots.

In The Arabian Pots, you try to sort the pots by listening to the sounds they make when you shake them. The game includes three groups of three pots, with each group making a different sound when you shake it, as well as one pot that makes no sound.

For the basic game, your goal is to create a row of three pots that make the same sound. To set up, set aside the quiet pot, then place the other nine pots at random in the 3x3 grid of the game board. While all other players look away from the board, the first player swaps pairs of pots three times, not shaking them in the process. All of the other players make three swaps in a similar manner, then the game begins. On a turn, a player takes one of two actions:

If that player thinks a row contains pots that all have the same sound, yell "Complete!", then shake the three pots to see whether the guess is correct. If so, the player wins; if not, that player loses their next turn and the game continues.

To use the quiet pot, during set up the first player replaces one of the regular pots with the quiet pot (without shaking anything), then does the pot swaps as usual. If someone shakes the quiet pot during the game, that player must then swap that pot with an adjacent pot while everyone else looks away from the board.

To play The Arabian Pots with people who are blind, announce which pots (1-9) you are shaking or moving. The notch in the game board indicates the bottom of the board.

As an alternate set-up, place the nine noisy pots on the board and the quiet pot to the side. Players then remove one pot at a time from the board, shaking them or not as desired, then place the pots in front of themselves. Place the quiet pot on #5, then take turns placing the pots on the board, leaving the final pot aside unshaken. Then play the game as normal except that whoever shakes the quiet pot must swap it with an adjacent pot (while others turn their back) and miss their next turn.