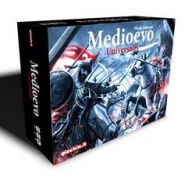 Boardgame of commerce, diplomacy, strategy and conquest set in the XIII century.
Players will have to manage one of the great Kingdoms.

Terrain: various types of terrain combined with city's fortifications and technologies give modifiers for movements and overpopulation.

Random turns: turns of the players are random, but can be influenced in part from the initial auction.

Auctions: plus the ability to buy entitled to play first, or put on sale, during commercial phase, part of their possessions.

Taxes and Reinforcements: collection of resources from their territories subject to various modifiers.

Trade: players have at their disposal sea and land transportations to trade 8 types of goods in 36 cities on the map to earn florins.

Technological advancement: 38 technologies deployed in 6 families on a maximum of 4 levels improve their Reign in economy, trade, military and diplomacy. These technologies implement the features of other playing cards or allow to protect yourself from Calamities.

Very rare events: calamities can disrupt and modify a lot all strategies... If the player is prepared, he will able to survive almost unscathed, otherwise ...

Random Events: a series of positive and negative random events, but less catastrophic, will hit the various areas of land or sea in which the map is divided: storms, missions required by the Pope, tournaments between players, merchants who offer trade … etc.

Development: the player has the opportunity to expand their cities, increase the fortifications and defenses, armies, military and commercial transport... and more.

Combat: the combination of technologies with the card game allows you to get a bonus set of modifiers during battles... and how about a nice Crusade? Don't forget to corsairs, pirates and Mongol invasions.

Diplomacy: there are six diplomatic options with other players, which take into consideration the Casus Belli and allow betrayals; also with expansion comes into play the Pope who will have to deal with the Crusades and the other Kingdoms Christians just waiting to take his place ... and if the Mamluks conquered Rome?

Expansion: the player is invited to expand his Kingdom to create an empire.

Aim of the game: earning the highest number of Honor Points, as you play, depending on the actions taken, you may gain or lose Honor Points, obtainable through many aspects of the game: trade, diplomacy, combat and conquest, cards of random events.