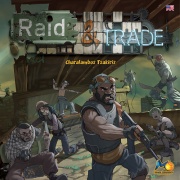 The 3rd World War was referred, by many, as the Last War because of the vastness of destruction that it had caused. Japan was the country suffering the least casualties whereas all others were almost completely destroyed. In the chaos, the Japanese government saw this as an opportunity to offer relief to the survivors and take control of the world by building special cities in key locations. The cities that were built each had a unique aspect; they contained golden metallic walls, symbolizing hope. Thus, they were named the Golden Cities. The game takes place 5 years after the Last War. The players will take on the role of people vying for citizenship within a Golden City (locations not specific so as to relate to each country).

Raid and Trade is a resource management game for 3-8 players. One of the main objectives of the game is to collect enough resources, via raiding buildings, so that you can enter the Golden City!!! The map is comprised of different areas (roads) with each one costing specific action points. The players move and play by paying action points. Dice are used in the game for fighting, loot calculation and various other game decisions.

Each time a player raids a building of a specific road, a raid card of that road is taken and read. Specific circumstances will happen each time a raid card is read. The player will be made to make various decisions including important moral decisions! Upon resolving the various decisions, you will receive character/fame points. The choices you make, for good or for bad, will lead to specific perks and advantages (or disadvantages) during the progress of the game. When raiding a building you get resources (tools, scraps, mechanical parts, electronic equipment etc). By combining these resources, you can craft items with special abilities. By doing so, you will advance your skill points.

Each player has a specific skill (mechanic, trader, electronics, technical, bodyguard, and medic). In order to get into the Golden City you have to listen to the radio message broadcasted from the Golden City radio. The city has specific skill and/or resource requirements and whoever reaches the target first is the winner. Players can either cooperate or attack each other but, in the end, only one can enter the city!