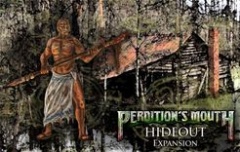 Neshilim, the deposed despot has spent recent months uncovering what led to his downfall. It was the damnable cult and their peasant rabble’s lust for change. Change? For good? What a waste of breath! No peasant would even know what “good” meant... yet they were the reason his colleagues now hung skewered on tall spikes, and he was on the run.

The Northern Vidal-Sis, in the vast open marshlands - where no one wanted to be, let alone live - had long sustained a small population of bandits, vagabonds, dissidents, and rabble from surrounding nations. Now and again those nations’ armies would try to hunt down the worst of them, only to inevitably fall to the bog itself. Clearing up the area had never worked out, despite repeated efforts.

It had taken weeks of tracking through the vast, smelly swamp to figure out which obscure hideout housed the cult among the random bandit groups. But he finally found it, and it was time to send a pigeon to that irritating halfling. Soon the cult would pay - one bit at a time.

The Hideout provides 5 scenarios, which are rather different from the Abyssal Rift main campaign. Should you manage to beat the cult, you'll secure a safe haven, at least for a time, allowing recovery and restocking. But the cult is relentless, so one day you might find your hideout being overrun. Never feel safe; remain vigilant.

The Hideout first appeared in the Gamer's Bundle in 2016 and appeared as a separate boxed edition in 2018.