War of the Void 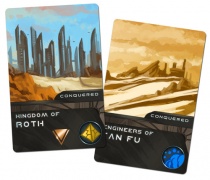 
Two galactic forces, the Imperium and the Union, meet at New Mars for a discussion of peace. The Union sends their most brilliant leaders, ready to hammer out a contract that will mean tranquility and prosperity for years to come. But as the meetings are about to commence, the Imperium fleet arrives and bombards New Mars to a fine powder, evacuating Imperium leaders just before the destruction. War immediately erupts in star systems far and near, and the Imperium circles the chaos like a vulture, snatching up planets and enticing new allies to join them. The Union quickly gathers its forces as princes and vice-presidents take the helm in the sudden power vacuum left from the attack at New Mars. Will they be able to stand against the growing storm that the Imperium commands?

War of the Void pits two teams of players against each other in a struggle to control the galaxy through conquest or diplomacy. Each player controls his own alien empire, building up a deck of cards unique to his alien faction to perform actions. Players on the same team complete their turns simultaneously, resulting in action-packed, quick gameplay.

Players must work together to dominate systems by taking control of planets. Planets can either be conquered, which will increase a player’s income, or befriended, which will give the player a special ability. Players must build up a fleet of ships to defend and attack, choosing from many ship types with unique abilities.

War of the Void is a thematic sequel to Empires of the Void. It in an entirely new game set in the same universe. The game is for 2-4 players and takes about 90-120 minutes to play. A planned expansion will add components for a 5th and 6th player.