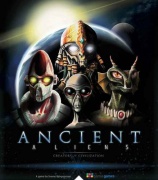 
The Galactic Overlords, the mightiest beings in all galactic dimension, are zooming through the Galaxy at the speed of thought. The Overlords reach a new destination. Before them; Earth – an uncivilized planet where species, later known as Humans, roam the grounds. The Overlords feel obligated to spark their development and four advanced Alien Hyde’s claim the task, as they have done many times before throughout the Galaxy. Their mission; to influence and improve the human race to a civilized stage through technological advancement and aid. Each of the Aliens Hyde’s oversee their own continent where they influence the inhabitants, but will they also fulfill their own agenda?

Ancient Aliens: Creators of Civilizations is a card-driven science fiction game played on an overview map of Earth and player boards. Players chose one of the four alien factions to control during the game; The Anunnaki, The Nephilim, The Buluzi and The Greys. Each of these factions have their own special powers and agendas that players use to improve and influence their continental areas, given in the start of the game. The aim of the game is to finish your alien Hyde´s agenda and improve your factions up to a civilized stage, where points will be counted and the player with the most points wins.

In the beginning of the game players receive one starting deck of 20 cards to draw cards from. As you improve your faction, you gain access to card decks 1, 2 & 3. Each deck is more advanced then the previous deck. Each turn, players lay down up to 4 cards. From each of these cards, players chose one of 3 available actions on each cards, by placing glass bead in their color on the chosen action.

Depending on the action chosen on the cards, players have various actions they can do: for example build different building types that will give them resources and divine power, improve their humans through technological or genetic changes, trigger natural disasters on other players areas to halt them or gain certain permanent improvements.

As they game progresses and players see their influential areas on Earth grow, they gain more resources and divine powers to use. Players use these to unlock requirements needed to build vast monuments that give them end game points and moves them closer to victory!

In the game players can build over 30 known buildings, items & monuments, ranging from mysterious artifacts like the Antykithera Mechanism to large monuments like the Great Pyramids of Giza. Although a science fiction game, Ancient Aliens is inspired and based on various documents, books and theories that claim that ancient human civilizations had aid from supreme beings through out history.