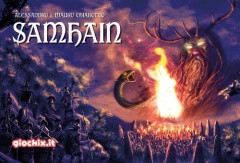 Autumn Equinox: the beginning of the darkest and the coldest part of the year. To the Celts is the most feared. All the clans are preparing to celebrate Samhain, the big event where they invoke the favor of the gods asking for the strength to face the harsh winter and survive until the arrival of the new spring.

But survival is not all. Each clan, always competing against each other, also asks the gods to prevail over rivals and ensure the supremacy during the warm seasons.

From the ancient traditions of the mysterious Celtic rituals, this game will engage the player in a mystical and evocative atmosphere, where delicate magic's balances are manipulated in order to achieve goals and to prevail over opponents.The ancient Celtic tradition is the backdrop to a silent struggle for power that is consumed within that, more importantly, for survival.

Samhain is a game for 2-4 players that will test your ability: not only will you need to think about what is appropriate for your interests but also how your actions are going to change others’ choices: in the village clan members will do what you command, but you’ll trigger the same action for each opponent clan member who will be in your activated location. Are you ready to optimize your strategy to favor only your people? Will you know how to exploit opponent's actions for your goals?

Forget the days when you had to wait long times for your next turn! They are gone! In Samhain you'll always be alert and you will have to see what happens during other clans' turn: they may profit you or mark your downfall!

As someone said ... "Winter is coming". Better be prepared to face the coming winter!