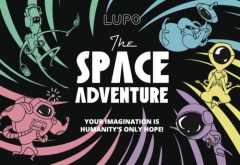 LUPO: The Space Adventure is a collaborative, storytelling card game in which your imagination is humanity's only hope!

Launch into a whole new galaxy of fun and imagination with your family and friends with "LUPO: The Space Adventure", a light-hearted storytelling card game, which takes you and your friends on a ridiculous sci-fi adventure. When planet Earth gets turned into a tiny raisin, it's up to you and your friends to blast off beyond the stars and create a new home for humanity. Get ready for a close encounter with fantastic new worlds and species, such as a world without gravity where social zombies live. Let your imagination run wild as you bring your ideas to life, from creating pen-and-paper designs to building your own spectacular spaceship.

LUPO: The Space Adventure is a cooperative game, so not competitive, no winners, not a lot of rules & making up own rules is just fine. It’s a light-hearted creative storytelling card game about imagination, creativity and being ridiculous. Mainly a game which allows your imagination to flourish & for you to be social with friends.