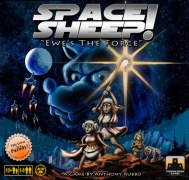 The life of a Strategic Space Sheep Commander isn't easy, especially if that Commander is assigned to the Lambda Sector. Centuries of peace had lasted throughout Lambda, the various Sheep Systems have settled their remaining differences, and the sector has seen a golden age of prosperity and scientific advancement. With the era of scientific enlightenment came the creation of the Spatial Sheep Distortion Drive, supplanting the now-outdated Warp Drive. The ships outfitted with such operate both independently and synchronously with System bases to enable the crossing of vast distances in relatively short amounts of time. With this, the races of the Systems were brought even closer together. Commerce and cultural trade were at an all-time high, and families allowed their Sheeplings to roam free across the neighboring regions without fear.

All was well in the galaxy – until the first messenger ship arrived from a force that has become known only as "Wolf". Its language was unintelligible, but its message was clear: complete and total annihilation of Sheepkind. Soon after, the first Wolf ships arrived, laying waste to the satellite planets of the Sheep Home Systems. Front-line galactic defense forces were able to stave off further destruction – but what is coming is far, far more terrifying than any threat faced in the galaxy's known history.

All Systems have been placed under Red Alert, with the Strategic Sheep Command called together and a Flock Commander named. As members of Wolf have been spotted in Sheep Commanders' uniform, SSC has determined that the best way of insulating the individual Systems is by outlawing all usage of the Spatial Sheep Distortion drives. Inter-system access is granted only to the Elite "Shepherd" class ships, via a complex network of Hyperspace travel. A fleet of these specialized ships has been assigned to recover the Sheeplings and return them to their Home Systems while the Wolf invasion is repelled.

You are a Sheep.
You are a Defender in the Strategic Sheep Command.
You have trained all of your career for this moment in history.
You will issue Tactics to the Shepherd Fleet to direct the Rescue Mission.
You know how to defeat Wolf – "Ewe's The Force..."

Space Sheep! is a real-time, customizable, cooperative game – with possible traitor(s) in your midst – for 1-8 players. The Defenders want to get the Space Sheep tokens and Shepherd tokens back to their matching Systems before all the cards are gone and time has run out. (If playing with Infiltrators, thus making the game semi-cooperative, each player receives a secret allegiance card; each player knows only her own allegiance, leaving her to guess and decipher who else is on her team.)

In Space Sheep!, on each player's turn, the player will play a card from her hand, allowing her to:

Additionally, a player may play a card matching the System occupied by the Wolf to attack (and knock the Wolf token on its side).

In Space Sheep!, one player acts as the Supreme Flock Commander, managing the one-minute sand timer. If the sand runs out, Wolf attacks and players must discard cards from the Defense Mat, the deck, or their hands; if they can't, they lose the game. If the Wolf token has been knocked on its side, the Supreme Flock Commander may flip the sand timer before it runs out to avoid the Wolf attack, standing up the Wolf token and moving it to another System in the process.

Players who are Infiltrators will, of course, be attempting to delay action, make poor moves, and subtly manipulate the other players into making poor choices of their own. At any time players may point at one another in an accusatory fashion. If more than half the players simultaneously point at one player, this player is out of the game. He then reveals his Allegiance and:

Players can customize Space Sheep! by varying the number of Systems in play (more Systems = more complexity), the number of tactic cards in the deck (fewer cards = greater difficulty), the strength of Wolf, the ratio of Infiltrators to Defenders, and the types of direction cards (more directions = greater variability).