Bardagi: The Claim for Gold 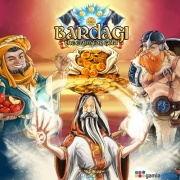 
Dissolution has occurred in the Vikings homeland; the country´s resources are depleted and there is turbulence in the society. The High Jarl has invited a group of brave people the opportunity to try their luck in a newly discovered group of islands. The islands are rich of natural resources and your task is to gain control of these resources from the Barbarian tribes currently occupying the area. The takeover is to be done in any way possible; through trade, religious conversion or direct conflict. If you manage to overtake areas peacefully, the Barbarians might join your clan and aid you in your task. There are areas through the island that stand neutral against any invaders and there you can buy or sell resources & learn runes. During the game, your clan tries to build up their region and over shine their rivals with vast riches and wealth. At the game end, the winner is the Clan Leader who collects the most gold!

Bardagi: The Claim for Gold is a card-driven, area management, adventure board game for 2-5 players, played in a number of rounds. Each player controls a Viking Clan; a Berserkur (your warrior), a Godi (your priest), a Kaupmadur (your merchant) and Knerrir (your Viking ship). Players receive 6 cards for each unit, total of 24 cards, and throughout the game these cards are used for each action of the corresponding unit. One action per unit - one card laid down. You can lay down any card type each round, maximum of 6 cards.

Each clan has its own Player board, a Viking village where they can upgrade their units and store their goods. During the game, players overtake the areas surrounding their village to gain resources. Players gain resources each round, according to the areas owned, and with these resources they can reload the unit shields, that are needed to overtake other areas, defend their current areas, improve their buildings, buy runes or trade resources in for gold.

The aim of the game is to collect as much gold within the given rounds. Most gold owned, combined with other point collections, declare the winner at game end.

Bardagi - The Claim for Gold has been launched on Kickstarter and will be there Live and available for pre-order as of 24th of October!