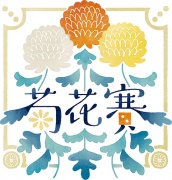 菊花賽 (Kikkasai) is a two-player dice game from Japan that derives a lot from Riichi Mahjong, the Japanese version of Mahjong.

The name is a pun on the phononym 菊花祭 (Kikkasai), a flower festival where exhibitors show off their prize blooms. 菊 (Kiku) is a popular and lucky formal flower (花 hana, ka) in Japan, and 祭 (sai or matsuri) is a festival. Many flower farmers strive for a better Kiku. There are flower festivals where you can find and buy many flowers, and so a festival focused on Kiku is 菊花祭, especially with plants shown in competition. But 賽 (sai) is dice, so 菊花賽 is also Kikkasai, making a Flower Festival Dice game.

The game follows the style of Mahjong, drawing dice from a bag, rolling, discarding, trying to complete sets. In this game, you only handle 2 + 1 dice, so your target is to create one single set. Many of the rules match Mahjong; draw 1 discard 1, claiming the dice your opponent discards, or the rule of "trend" which gives you extra points (like the Dora rule in Mahjong).

Initially, one die is placed as the "trend". You get extra points for winning a hand by using a same colored die / same pip with the trend die. Then each player grabs 2 dice from the bag and rolls behind their screen. These dice are the players' hands.

The round ends when any player wins, or the bag is out of dice. Put all the dice back in the bag. If any player has 0 points or less, that player loses. Or else, start a new round, switching the starting player.