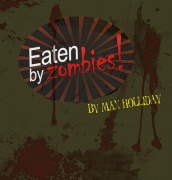 Description
In the new game Eaten By Zombies! players strive to survive as the horde of the living dead make it their goal in Death to force you to join the crowd. You must work with or against the other survivors to be the last one standing. No not standing, cowering in the corner crying for their mommy.

In the spirit of AMC's "The Walking Dead" and "I Am Legend", Eaten By Zombies takes you into a dark world of eventual death. Every turn you must venture out from your safehouse and scavenge for Swag. But not so fast, the Undead have other plans for your brains. Every day a Horde of fresh zombies will be waiting for you, and over time the threat gets greater. Now it's time for your "Fight or Flight" instincts to help you to survive just one more day. Using the swag you've got on you (ie cards in you hand) you must survive any way you can.

If you can get away or kill the Horde, you may scavenge the remains of the desolate suburbs for any Swag the neighbors may have left behind. With the right stuff and a few good friends to out run, you may just make it through this alive... well, no probably not. But being the last one to die a slow, painful death means you can claim sole victory!

With a set of over thirty different cards to start with, no two games will ever be alike. This game is a combination of Card Drafting, Hand Management and Survival Horror with a few dirty tricks thrown in.

Game Play/Mechanics
You start with five heavy sticks (each worth +1 fight) and five hide cards (each +1 flee) as well as two sandwiches (+1 Flee & Draw one card). You shuffle these 12 cards and draw 6 into your hand. You then face one of the 25 zombies from the Zombie Deck with a fight value ranging from 1-8 and a flee value of 1-4. You must announce Fight or Flee and then proceed to play some/all of your 6 cards in your hand.

If you successfully fight/flee you then take the total fight/flee value to the scavenging portion of your turn (think of it as a "buy") where you acquire items such as Shotguns, fists full of ammo, crowbar, binoculars, fire on a stick, grandma pantry, deadeye or other cards which you then put INTO YOUR HAND for use in the very next turn and draw back up to 6 cards from your draw deck. Played cards go to your discard pile, including any zombies you have succeeded in killing.

If you are unsuccessful in killing/fleeing then you must lose a number of cards equal to the flee value of the horde. These lost cards come from either your hand or as a blind draw off the top of your draw pile and go back to the scavenging area, weakening you. If you run out of cards you succumb to your wounds and become a zombie, now trying to kill the other players on each turn.

If a player ever ends up with six zombie cards in his/her hand the zombie players win as the remaining players have gone insane. Each time the zombie deck is gone through and reshuffled you add one more zombie to the horde for the rest of the game, making perpetual survival impossible.

It isn't a matter of if you're going to die but when. Be the last player standing and win. If at any time the entire zombie deck is depleted (because the players have killed all of them rather than using flee), all remaining players alive win together.

This is a unique cooperative/competitive game where you really feel the tension and inevitability of doom. You spend the first few turns building up your deck only to see the zombies increase in power and slowly drain your will to live as the game progresses.