Captains of the Golden Age: Captains and Characters 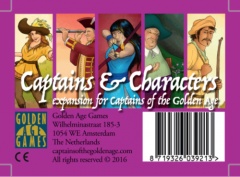 ERRATA: Players can only buy one character per turn.

The infamous innkeeper has a curious grin on his face as he says “Friends,how good of you to visit Smuggler’s Cove inn again! I’ve been quite busy expanding here, let me show you.”

He opens a hatch behind the bar and urges you to step down a ladder into what you assume must be a secret room below. As you descend the ladder the scent of spices, perfume, and other exotic wares you can’t quite place greets you. The room is as exquisite in decoration as it is in fragrance, and inside is a group of a dozen or so outlandish individuals.

“These are some of the friends I met while sailing the seven seas”,says the infamous innkeeper. “Like myself, each of them is uniquely skilled and they’ll gladly work for you.

But their trade doesn’t come cheap; it will cost you pepper...”

Characters can be bought for a single unit of pepper at Smuggler’s Cove during the harbor phase. Players may always look at the stack of available characters, and when they buy a character they may choose it from the stack themselves. Players may have any number of character cards.

Each character has a unique effect but only functions as long as it is face-up. Characters can be turned face-down in the following four ways:

1-When you board another players’ ship with your crew and win, for each cargo of the losing player you decline to steal you may choose a character of that player and turn it face-down.

2-When you bombard another players’ ship with your cannons and win, for each ship segment of the losing player you decline to damage you may choose a character of that player and turn it face-down.

3-‘The Artful Assassin’ can be used to turn a character of another player face-down.

4-‘The Sneaky Stowaway’ has to be turned face-down when it is used.

1-In the Republic you may turn all your characters face-up during your harbor phase.

2-In the Orient you may turn all your characters face-up during your harbor phase.

3-At Smuggler’s Cove you may turn all your characters face-up during your harbor phase if you have ‘The Infamous Innkeeper’ and it is face-up.