The Kingdoms of Crusaders 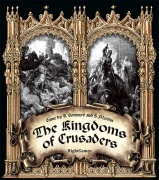 In The Kingdoms of Crusaders, players assemble units to create armies and overwhelm opponents competing for the same territories. The game includes components for a two-player game; by combining two sets, up to four players can compete.

Units are represented by cards, with each card depicting the forces in it with color-coded symbols across its top. The forces come in five strengths, which from weakest to strongest are Lance, Bow, Sword, Helmet and Banner. For example, a unit (card) with Sword and Helmet will have across the top: blank, blank, green, yellow, blank. Each player starts with a hand of five cards and a location card on the table depicting five territories, which is where a player lays his cards.

To determine who wins the battle in a territory, compare each player's army in this territory. The player whose army has the most Regiments wins; if players are tied for the number of Regiments, then the player with the strongest Regiments wins; if players have equally strong Regiments, then the player with the most Battalions wins; and so on. Even if his opponent(s) have not completed their armies, a player can win a territory by proving that it's impossible for someone to create a stronger army in the same territory.