Revenge of the Dictators 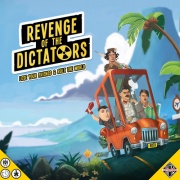 Welcome to your favorite holiday destination: Hawaii! Hawaii is a place to relax, drink lots of cocktails, and do nothing all day — except, of course, if you're a dictator. So what are dictators doing during their holidays? The same thing they do every day: Trying to take over the world! And what is a better place to start then that pesky "Ol' Murica"?

Revenge of the Dictators is a way too competitive board game for 2-5 players. For the course of the game (yes, only during the game) each player becomes a vicious self-loving dictator. The ultimate goal of the game is easy: race across the map of North America, confront the President, take over the USA, and by doing so gain absolute control of America's forces and therefore the world! The only thing the dictators have to do to avoid eminent repercussions is disarm some nuclear facilities in order to remove the nuclear threat targeting their home countries. Sounds simple, right? The only thing is that dictators aren't used to working together — and in the end there can be only one Grandmaster Über Dictator of the world!

The game is divided into turns, and each turn consists of any possible combination of the following three actions: draw a Command card, play a Command card and Travel (maximum of once per turn). Players start in Hawaii and race across the map towards the White House in Washington DC. During the game, players can disarm any number of the nuclear facilities they received by rolling a die. In the end, the players have to confront the President at the White House and convince him to give up control of the U.S. by rolling a die. The chance of success drastically increases with each individually disarmed nuclear facility. Players are able to gain bonuses by disarming nuclear facilities of Nuclear Zone 4 (Canada and Mexico). In the meantime, the U.S. — that is, the game system itself — fights back by increasing the DEFCON level (with various effects) and with the use of random Founding Father cards which are included in the Command deck.