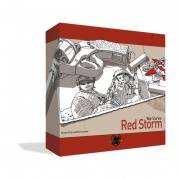 
War Stories combines the best of miniature and board gaming to create a fast-playing, rewardingly deep tactical battle system with wooden blocks — and optional museum-quality vehicle miniatures. Easy to learn for the casual gamer and difficult to master for the die hard wargamer, pushing infantry and gorgeous tanks around the board has never been this much fun! Red Storm, the first entry in the War Stories series, features twenty scenarios chronicling the ascent of the Red Army during World War 2 — from the turning point at Stalingrad to the Battle of Kursk — Red Storm puts glorious T-34s, Panthers, Tigers and many more high-quality pre-painted miniatures at your disposal to achieve your objectives and outfight your opponent.

What makes War Stories stand out is the combination of a detailed hex and counter game with the ease and fluidity of a lightweight miniatures game. The DICELESS system resolves combat with a single card draw. No tedious to-hit calculations before every shot. Just declare a target, draw a card, and READ the result. There is incredible detail on each card but ALL the number crunching is done for you! It sounds too good to be true but you need to see it in action to believe it! All you have to do is trust your plan and draw a card. The focus is on developing real life tactics, not gaming a system.

War Stories is not a perfect information game. You won't know how suppressed units will perform until they are activated. Blocks hide information for each unit and create uncertainty as to the exact disposition of your opponent. Hidden units and Fog of War events mean no plan survives contact with the enemy, but don't expect gamey situations like waiting for cards to activate units or your opponent playing cards like the Hand of God. Every event has been scrutinized to ensure players cannot influence the battlefield situation in ways that defy logic.