Captains of the golden Age 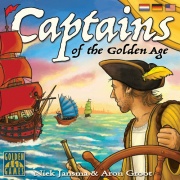 Captains of the Golden Age is set in a fictional East-Indies in a time when pepper was worth more than gold!

Each player starts the game as a captain on a small ship with an empty cargo hold. The amount of sails on your ship determines how far you move. Crew is used for boarding. Cannons deal damage to other ships and the size of your cargo hold determines how much cargo you can load and carry. Each player has a deck of cards that can be used as temporary buffs to sail further, carry more cargo, or change the tide of battle.

Over the course of the game, each captain gathers resources to upgrade their ship or trades its cargo for valuable pepper to get shares in the Trading Company and ensure victory. You can board other captains' ships with your crew to steal cargo or attack them with your cannons to temporarily damage their ship. Trade, upgrade, attack and defend yourself, but beware of the pirate who will try to steal your cargo!

• Sail: Move your ship across the board based on the amount of sails you have on your ship. Sail cards may be played to temporarily sail further.

• Load: Load cargo when you arrive on one of the four islands. You load Cloth at the Weaver, Bronze at the Smelter, Wood at the Sawmill, and Rum at the Distillery. The maximum amount of cargo you may load onto and carry with your ship depends on the size of your cargo hold. Cargo cards may be played to temporarily carry more cargo.

• Combat: If you arrive on the same tile as another captain, both captains may decide to either attack with cannons or board with crew. The captain that just moved picks first. Any difference in cannons determines how many segments of the losing captain get damaged and any difference in crew determines how much cargo the winner steals from the losing captains' cargo hold. Both captains may play cannon or crew cards to change the tide of battle in their favor.

• Cards: If a captain arrives on a sea-tile, activates their Captain, or buys a card share, they may choose a card from their deck and add it to their hand. The turn ends after a Captain chooses a card.