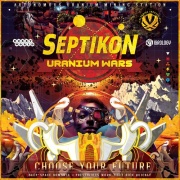 In Septikon we have tried to re-create a retro-futuristic atmosphere which was popular in games like Fallout and BioShock. The players take role of the owners and leaders of orbital mining battle stations, which are hunting for rich uranium deposits in an asteroid belt.

Since there is not enough uranium for everyone, the players have to fight with other space explorers for every asteroid. By using a rich armory of defensive and offensive measures and a loyal crew of their own clones, the player will have to survive a terrible battle and do everything to be first to put the other player out of action.

This game is completely unique. Imagine a turn-based game in the Tower Defence genre, where you must not only protect your own prosperity, but also send waves of attackers in your opponent's direction!

How do you play?

The station is not automated, which makes it much more reliable but at the same time requires a crew for manual operation. The player rolls a die, which determines the distance that one of his obedient clones can travel to the required section, to activate a piece of equipment or a weapon which is installed there. The choice of clones and the goal will depend on the current situation and the player's long-term strategy.

The station is completely autonomous. The player can mine and process resources, carry out repairs, defrost new clones to increase the size of his crew — but it's not that easy when you are being attacked by your opponent's entire battle force, and you want to teach them a lesson...

The player wins when he puts the other player's station completely out of action.

Why should I play Septikon?

What's in the box?

How did the game come to life?

Igrology is one of most successful Russian board game developers. We have created 18 products, many of which are constantly being re-published. In 2011, we have sold over 100,000 copies in total in Russia.

Now we are facing a new task, to bring unique ideas to the international games' market. Septikon is the first and very important step for us in that direction.

Septikon was created by the Russian game designer Konstantin Seleznev and polished by 12 years of work and thousands of matches. In 2011, Igrology noticed this original game at the Moscow Games Convention "Igroteka Avtorov", where all other publishers did not pay a lot of attention to it due to its very unusual concept and seemingly complicated game board.

The Igrology team, together with the game author, spent almost a year creating a setting, fine-tuning game rules, and polishing the design. Now, we have the pleasure of bringing it to all board game fans.

During the next year we will be releasing the first expansion, as well as an iPad version of Septikon.