Supervillain: This Galaxy is Mine! - Nebula Expansion 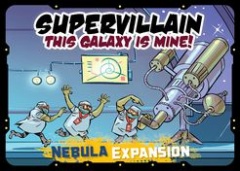 — Dad, – a little minion asked, – what is shining so bright in the night sky? Is it a planet?

— No, it’s dark on the planets during the night – they are saving power to build Secret Projects.

— No son, we can’t see stars – the entire outer space is veiled by smoke traces left by Asteroids.

— They say, it’s an ancient space station flying in a nearby nebula, – mysteriously whispered father minion making his eyes even more round. – This is an artifact of proto-Villains who had lived long before the birth of our Master! This station contains countless treasures...

— New Secret Projects, Asteroids, and more Minions? – the kid supposed. In response, the father gave a pat on the son’s helmet and tousled his toy plasma gun hanging on the belt. A smart boy is growing! Just like his father.

While the Nebula card is in game, each Villain may launch Asteroids into the Nebula – instead of targeting other Villains.

A Villain may send a charged Asteroid into a Nebula as well. Such an Asteroid smashes the Nebula into pieces after executing its effect. Why do so? To prevent other Villains from getting benefits from that Nebula, of course!