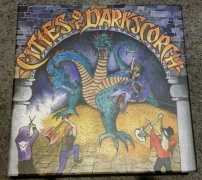 
Cities of Darkscorch is a, decidedly adults-only, fever dream of a game in which players take on the role of ambitious rock bands, traveling from city to city and battling both the other players and a deck full of rival bands for supremacy. If a player can defeat a band in each of 16 cities, they can then move into the center city, and attempt to win one last battle to score a record contract, and win the game.

The band names and logos, printed onto the old-school wooden 45rpm record adapters that are used as the player pawns, the board, and the card art and text combine to portray a world out of the school notebook of some mid-1970's Led Zeppelin loving, Dungeons and Dragons obsessive teenager.

Players take turns moving around the board a number of spaces determined by the roll of a standard die, either fighting a band battle, rolling for movement again, or passing play depending on where they land. Each player holds a hand of five "Fate" cards, which might be one of four kinds of band members that can be played in front of the player, and persist from turn to turn; bonus cards that can help the player in battle; and cards that can be played to penalize other players. During a battle, the player draws a "Foe" card, representing a band they will battle, rolls a four-sided die to determine which band member will battle, and plays Fate cards to boost their chances. The result of the battle is found by rolling a twenty-sided die, plus whatever bonuses from the players own Fate cards, penalties from cards played by other players, versus a score on the Foe card. If the player wins the battle, they collect the "banner" for the city, tracked by each player on a card reminiscent of an auto-bingo card. Play passes around the table until a player collects all 16 of the banners, allowing them to finally enter the center city, "Numenor", and battle one last time in a bid for victory.