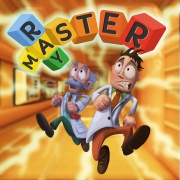 From one of the most hidden laboratories in the Atomic Biochemistry Brave Academy (ABBA), a shout rises to the skies: “¡Eureka!”. After years of research, Professor Röntgen has invented a new thingamajig that apparently is capable of modifying the atomic composition of objects, to the point it can make them shrink and grow at will. But the underworld of science is horrifying and his “colleague”, archrival and former student, Professor Stern, wants to steal his idea. In the next few days, the Academy is going to decide which department will get funds to continue their research, so lab safety has become a secondary concern. Both professors must use their scientists and students wisely, to get the most astonishing test results, while discretely trying to sabotage your rival.

To get the best experimental samples, you must use the ray to manipulate the value and size of your dice, while you sabotage your opponent, by modifying his. The higher the visible value on the die, and the smaller the die is, the more points you will get. To win the game (and get the funds!), you will have to get the most points with this method.

During your turn, you can perform one or more actions (without repeating any). The available actions are represented on the control panel board, and you will use scientists and students to trigger them. Each turn is played in three consecutive steps. Once you're finished, it’s your opponent's turn, and so on until the end of the game. These are the three steps:

Action Selection: Choose the actions you want to perform this turn. First, pick a student from your hand and place in in the control panel, covering the action it’s going to perform. Then, use your available scientists to select one or more actions, as explained below. Note: you can’t repeat the action on a student card.
Action resolution: In whatever order you choose, perform your selected actions, taking back the corresponding scientists and students as you do. Student cards go straight to the discard pile, but you get your scientist team back for next turn. If you haven’t shot the ray this turn, take the extra scientist, aside from your two regular ones. This additional scientist will help you during your next turn. If it is already in your possession, and you have shot the ray this turn, put it back, next to the testing room board.
Hiring a new student: Once you have solved all the actions, draw a new student card from the deck. You will continue drawing cards every turn until the deck is over. Once the deck is depleted, keep playing your cards from your hand normally. Once all students have been used (players don’t have available student cards in their hands), shuffle the student cards deck to form a new face down pile on the table. Both players draw two new student cards and continue playing normally.