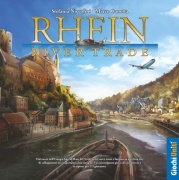 The Rhine is one of the longest rivers in Europe. Its path has represented a vital route for commerce and transport since ancient times, taking ships from the heart of the continent across various countries all the way to the North Sea. Every day, its slow but tireless flow accompanies planes, trains, ships and trucks in a close-knit network of connections between major cities.

Rhein: River Trade is an absorbing game of commerce and transport for 2-5 industrious players 12 years of age and up. The most important companies in Basel receive, assess, and acquire goods orders from the various cities located on or near the Rhine, and even as far away as London. Each order defines the destination and the number of containers, the delivery time, the agreed price, and the possible penalty. Using shared planes, trains and ships and their own trucks, the players must arrange these shipments, limiting the costs and making sure that delivery times are respected. The player who earns the most money wins.