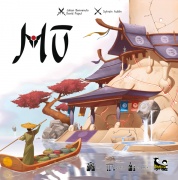 Each player starts the game with two project cards — cards fueled by source tokens — and an empty 3x3 grid that shows semi-circular source symbols around the edges. The game lasts four rounds, and in each round you draft three cards. At the end of the second, third, and fourth rounds, all players compare their strengths in various horizontal or vertical rows on their grid.

In the first round, you draft three project cards, each with special effects that can be used if you fill all the source symbols on it. In each of the next three rounds, you draft and play three building cards. When you play a building card and complete one or more source symbols (by matching the colors on each half symbol), you receive a source token of that color for each completed symbol, which you must immediately place on a project.

At the end of the game, players feed their city, scoring based on the number of food symbols they have and the number of non-destroyed buildings. Players also score AP for faith symbols in their city.