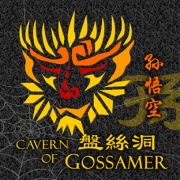 
Journey to the West, published in 16th century, is one of the four major classic novels of Chinese literature. In the story, Master Xuanzang and his four disciples traveled west seeking sacred religious scrolls in India. Long after the fellowship passed the Mountain of Inferno, they came to meet another fierce challenge in the Cavern of Gossamer ...

Cavern of Gossamer is a 2-4 player micro game based on this chapter in Journey to the West. In the game, players are characters in the novel using their abilities and other disciples, spiders, etc. to rescue or slay the Master. The goal of the disciples is to find their Master and rescue him so they can continue their journey. On the other hand, the goal of demons is to slay the Master in the Cavern of Gossamer and consume his flesh for eternal immortality.

Each turn, player can draw a card or take a role action, such as rescue, slay and etc. If player chooses to draw, player draws a card from draw deck then secretly deploys the card into Hot Spring or Cave OR plays the unique draw rule on the card.

If disciple player chooses to take a rescue role action, player will draw two cards in Cave and attempt to bring the Master to player's hand. When any one player draws To the West card in a later turn and the disciple player still have the Master in hand, disciple team wins the game.

After players have learned the rules and played the game for few times, players can use option rules to keep track of victory points (VP) for ALL 4 players, including players who are controlled by Monkey King and Centipede players. After number of games, the player with most VP wins the game.