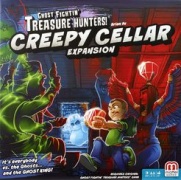 The dark and dreary house is taken over by ghosts yet again, but this time the rules have changed. The Ghost King has arrived! The front doors locked the moment you entered, and the only way to open them is to take the treasures down to the cellar rooms before escaping the house. Do this and get the whole team out of the house before all eight hauntings are on the board!