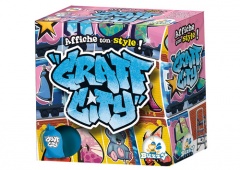 
Cover the city in graffiti and earn respect of your rivals by creating the most original words. But be careful! Only the graffiti left at the end of the game will allow you to earn points. Don't hesitate to cover the creations of your opponents, while always thinking to protect your own!

Each player has a character card and corresponding tokens (by colour) that are used to tag which graffiti was done by them. The game is played in 6 rounds, with 2 phases per round. The Night phased is when you do the actual graffiti and the Day phase is when players explain their creations and voting takes place. Each player starts with a hand of 7 cards. There are 2 types of cards in play, brick walls and Subway cars (BW and SC for the rest of this explanation). Each player then secretly constructs a word (no, this is not scrabble, you can have fictional words. Acronyms may be constructed, but with a limit of 3 vowels or 3 consonants in a row. You must explain what each of the letters means), as long as the words are made up entirely or BW or SC cards. No mixing is permitted! The words must be pronounceable (no smattering of all consonants or all vowels). Add your artist tag (worth the corresponding number of points hidden on the underside) to your creation and the Night phase is complete.

During the day phase, you reveal your word to other players and then explain why your creation is the best of all (in a counter-clockwise manner). Once you've explained your reasoning as to why your creation is the best, voting takes places. Simultaneously, each player points to the creation they find the best and places their tag on the appropriate creation. If no one votes for your creation, you do not turn your tag over and receive no points for this round. Each draws up to their 7 card hand limit and the Night phase recommences.

Aside from SC and BW cards, there specialty cards within the game:

Police Officer cards (that you may have drawn from the deck) protect your creation from being painted over by only one person. The remaining players are free to attack your design.

Bag cards allow you to draw an additional card at the end of the Day phase.

Eraser cards steals the opponent's card of your choice, that is part of a creation on the table.

Ladder cards permit you to cover a second creation of someone (instead of the typical creation that was just played).

Covering others' creations (possible as of the second Night phase) requires that you use the same card type + 1 (4 letter BW creation must be covered by 5 BW cards).

The aforementioned Special cards must be used BEFORE placing the current Day rounds creation in your personal player area.

The rounds continue until the sixth round has past.

Endgame scoring is calculated by counting the cards of each word that has not been painted over by other players multiplied by the number indicated on the tag placed on he word. Example: 7 letter word X 3 point tag = 21 points for that word alone.

The player with the most points wins!