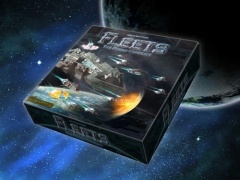 
In 3400 AD, mankind has colonized the Pleiad star cluster where mighty corporations vie for control and influence. Each player equips fleets with escort ships and upgrades and uses them to control star systems for VPs. Diplomatic leverage, cunning, and brute force will determine the victor.

Each round in Fleets: The Pleiad Conflict consists of six phases:

1) Player order. Every round has a new randomized player order. Being first has its pros and cons, so does being last.

2) Build. The players take turn buying new fleets, escort ships, and upgrades, using their megacredits. The fleets each consist of a flagship and space for some combinations of escort ships and upgrade cards. Which fleet you choose and how you develop it will determine its strengths and weaknesses.

3) Deployment. The players place their fleets at the different systems they want to control.

5) Battle. At every system with more than one fleet there will be a battle where every ship gets to shoot once. Each fleet has different initiative numbers for its ships, describing when they get to act. Late ships risk being shot down before they have a chance to fire. During battle, players can also use battle actions on action cards, upgrade cards, fleets, and escort ships. Most battle actions cost energy from the fleet. If a flagship is destroyed, its owner must immediately retreat all surviving escort ships from that battle and discard the fleet.

6) Reward. Players get 1 VP for each system they have to themselves (The first player to reach 7 VP is the winner.). Then each fleet gets energy from its reactor and resources from the system where they are located. Then each player gets 2 diplomatic points, 6 megacredits, and an action card, and then the next round can begin.