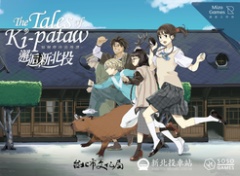 Due to a distortion in the space-time continuum, six characters from different time periods have been brought to Ki-pataw in the year of 1937. Players take on these characters on a mission to collect specific items/energies they need and go to the designated place in order to return to the time period from which they came. Alternatively, they can encounter other characters and choose to remain in Ki-pataw instead. The choice is for you, the players, to make.

In The Tales of Ki-pataw, each player plays as one of six characters: capybara, modern girl, man from the future, witch, Japanese soldier, and tribal youth. Each character has their own missions to find the way home. During a player's turn, players perform the following actions in order: movement, encounter, visit, and preparation:

1. Movement phase: During this phase, you can play any number of cards from your hand and move your character meeple accordingly.

3. Visit phase: During this phase, you can perform the unique attraction action where your character meeple is currently located. For descriptions on each attraction action, refer to the corresponding section later in the rulebook.

4.Preparation phase: During this phase, you can choose to keep any number of cards in your hand and discard the remaining to the discard pile; draw from your character deck until you have three cards in your hand before ending your turn for the current round.

In this game, a player may win two ways: A solo victory in which the player fulfills the conditions to return their chosen character to their original timeline, or a shared victory in which two players win together by choosing to remain in Ki-pataw instead of returning home.

"Ki-pataw" is the name that the plains indigenous people who lived in the area used to call New Beitou. The term, which is a Ketagalan word, means "witch". It came about because of folk legends on silhouette of woman people claimed to have witnessed, probably caused by the steam from the geothermal valley.