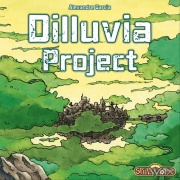 The population on Earth has grown beyond the productive soil capacity, and the ocean level is about to drown some of the major coastal towns along the planet. An emergency project is set to ensure the first city underwater as a pilot project for the coming future: the Dilluvia Project.

In Dilluvia Project, the players represent different companies operating on the construction of the first underwater city. Their purpose is not only to build the city in deep water, but to establish a population there. The estimated capacity of Dilluvia is about 5,000 persons, split among residents, service people and scientific personnel. The player with the most efficient procedures to bring population to Dilluvia will win the game. It's crucial to build competitive buildings, but it's also very important to increase the company prestige in order to capture the interest of new inhabitants.

The game lasts seven months (seven turns), during which the modular buildings will be implemented. Each turn consists of a buying phase (through an original system) followed by a worker placement phase. A special worker allows the first player to occupy the action spot to realize it with a bonus. The dome of Dilluvia is space limited, and all terrain must be bought and approved by the government (as there are some restrictions) before placing any building. Players will also struggle to occupy the preferable areas and try to achieve goals that bring them honorific titles and additional prestige.

After the worker placement phase, each player takes his income (prestige points, money and resources) according to his active buildings and the activated functions in them. (Each building has two different income proposals.) Each month, one event will happen, and the companies may also realize outside works to obtain prosperity.

Will the Dilluvia Project become the seed of a new world underwater, guaranteeing the mankind survival in a more and more scarce world?