Defenders of the Last Stand 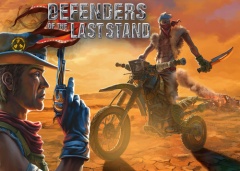 
Defenders of The Last Stand is a post apocalyptic adventure game by Richard Launius (Arkham Horror, Run Fight or Die, Defenders of the Realm) for 1-4 players set in the Western United States 80 years after nuclear war. Players take on the roles of Defenders of the last known haven for humanity, called The Last Stand. Three outside clans advance toward the town, and players work cooperatively to defend The Last Stand. Menacing mutants also roam the desert threatening the city's survival. The game will introduce player character mutations - your character can mutate from travel into irradiated areas. Gameplay will consist of both elements of adventure and conflict resolution, and Defenders of the Last Stand will come loaded with miniatures, including three large sculpted miniatures of the invading Clan leaders as well as their minions - sculpted by Chad Hoverter. The three warrior clans include raiders on bikes and in cars, another group of mutated humans who ride large beasts, and a third clan consisting of techno savvy, yet criminally insane youths.

"Today we discovered a fallen caravan not fifteen miles up dry road. I had been that way to visit Auntie's just recently and there weren't no caravans, fallen or otherwise, there before. This means the Raiders have been circling the last stand for at least the last two weeks. Pepzi asked me to stay a while in case they attack. No more scavenging for now, she said. "Something is brewing. The air hurts my lungs. I see shadows in the hillside." The air is more dry than usual. My lips have all but cracked off. Doc gives me salve to put on them, but I tell him to keep it for the kids. New families are appearing in Stanfield. It's a good site to see. We are finally surviving a bit, and bringing kids into this world again. I'm thinking of how in the good book we are told to be multiply. It's God's will, but most would say this land has been forsaken by God, but I'm hoping we can start again. Me, I'm hoping for the best, but my bones tell me there is no best.

"The Last Stand was known as Stanfield back in the old world, before the great war. While battles raged in the cities across America and the world, as far as we know, some old-schoollers, cowboys, fighters, and drifters came together in this desert to escape the end of the world. The desert was only the safe place and Detroit says it's where a man learns to be a man. Detroit told me that Stanfield changed its name to The Last Stand back then. cause it was the last fighting chance for humanity. Detroit knows lots of stories. He is old and claims he was alive in those days, 80 something years ago, back when they played something called baseball and Nitena. I don't know what to believe from his mouth, but he is a hoot to listen to. Course, he has been around a long time, changed by the Radiation – mutated like many folks, but still as human as human can be, unlike the raiders. Detroit is one of us now. He knows stuff and and we are going to fight tooth and nail against the raiders wanting to take what we worked so hard to build. Rumor is that they have merged, and I reckon they will have to to capture this city. We are bonded together. Even got a little ancient technology and oil. Bad stuff maybe since it is what brought us here. We'll use it carefully. The Last Stand may be our last hope. I don't know if there are any other cities out there worth fighting for."
--Taken from the Journal of Marha Bourne Star